For a very different example we look to scientific computing. In math class you likely learned various ways to find roots of functions f(x) exactly. In practice those methods almost never work beyond low order polynomials. Hence the best we can do usually is to approximate solutions numerically. One broadly useful approach is the bisection method. You just need a continuous function (with an unbroken graph), and you need to first find two places, a and b, where f(a) and f(b) have opposite signs. If f is continuous and goes between positive and negative values, then it must cross 0 somewhere in between, and so there must be a real solution. The question is how to get close to a crossing point efficiently.

As an example we show \(f(x)=x^2 - 2\), in the range from x = 0 to x = 2. As a first example we choose a simple function where the root can be figured symbolically, in this case the square root of 2. The figure below shows the graph, with extra horizontal and vertical lines that will will be explained. 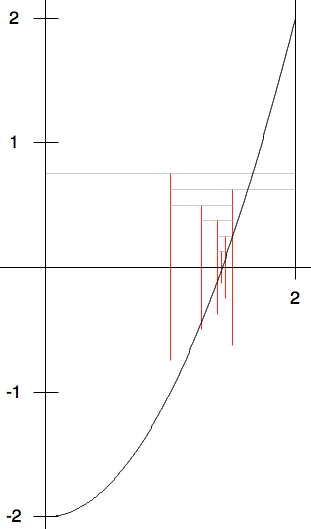 In the figure the initial interval has the same x coordinates as for the top gray line. Its midpoint is at 1, the x coordinate of the red vertical segment coming down from the top gray line in the figure. Note f(1) < 0, the opposite sign of f(2), so we next consider the half of the original interval from the midpoint 1 to 2, with the next gray line marking this interval. The function still must cross 0 in the smaller interval because of the opposite signs for f on the endpoints. In the iterative procedure, you continue this process, halving the length of the interval, shifting one endpoint or the other to be the middle of the most recent interval, so for each interval, the signs of f on the two ends are opposite. Repeating this procedure, you can home in on as small an interval around a crossing point (root) as you like. The figure show this process for the first 5 steps, halving the interval length each time. You need to look at the output of the code to follow the results for even smaller intervals.

This approach always works, as long as the signs of f at the initial endpoints are distinct. Our Bisection functions check, and if this initial requirement is violated, the function returns the special double code value, double.NaN, meaning not a number.

There are other approaches to finding roots that may be faster when they work, but many of these methods can also have some chance of completely failing, so root finding algorithms generally have two extra parameters: a maximum number of iterations and a tolerance that indicates how close to a root is close enough.

In the Bisection function we use a and b as the endpoints of an interval and c as the midpoint. In each iteration the value of a or b is reset to be the previous midpoint value c. Of course a production version would not print out all the intermediate data, as the interval shrinks, but we do for illustration:

Since the bisection method always homes in on a real root rapidly, an alternate version specifically for the bisection method finds the best approximation possible with double arithmetic. While you can always halve an interval mathematically, you eventually run out of distinct double values! We can stop when the midpoint (calculated with limited double precision) is exactly the same as a or b:

C# remembers double values to more decimal places than it will actually display, so the second illustration also shows the difference between a and b, indicating the double values are still not really equal even after their displays match.

The current versions have a major limitation: They just work with the one canned version of the function f in the class. You need to edit the source code to use the same process with a different function! There are several ways around this using more advanced C# features. After the section Interfaces, a more flexible version should make sense, bisection_method/bisection_method.cs, explored further in Bisection With Function Interface Exercise. The more advanced version illustrates with the function in the initial version and several others, all using the same bisection function.

The idea here is to see how many years it will take a bank account to grow to at least a given value, assuming a fixed annual interest. Write a program savings.cs. Prompts the user for three numbers: an initial balance, the annual percentage for interest as a decimal. like .04 for 4%, and the final balance desired. Print the initial balance, and the balance each year until the desired amount is reached. Round displayed amounts to two decimal places, as usual.

Save the example program strange_seq_stub/strange_seq.cs in a project of your own.

There are three functions to complete. Do one at a time and test.

Jump: First complete the definitions of function Jump. For any integer n, Jump(n) is n/2 if n is even, and 3*n+1 if n is odd. In the Jump function definition use an if-else statement. Hint 1

PrintStrangeSequence: You can start with one number, say n = 3, and keep applying the Jump function to the last number given, and see how the numbers jump around!

This process of repeatedly applying the same function to the most recent result is called function iteration. In this case you see that iterating the Jump function, starting from n=3, eventually reaches the value 1.

It is an open research question whether iterating the Jump function from an integer n will eventually reach 1, for every starting integer n greater than 1. Researchers have only found examples of n where it is true. Still, no general argument has been made to apply to the infinite number of possible starting integers.

In the PrintStrangeSequence you iterate the Jump function starting from parameter value n, as long as the current number is not 1. If you start with 1, stop immediately.

Write a program to complete and test the function with this heading and documentation:

Hint: The non-exceptional case can have some similarity to the bisection in the best root approximation example: start with two endpoints, a and b, where x+a = x and x+b > x, and reduce the interval size by half….

If you divide an even number by 2, what is the remainder? Use this idea in your if condition.