Now that we have learned a bit about classes, we’re going to use the same feature to support unit testing. Unit testing is a concept that will become part of just about everything you do in future programming-focused courses, so we want to make sure that you understand the idea and begin to make use of it in all of your work.

The notion of unit testing is straightforward in principle. When you write a program in general, the program comprises what are properly known as units of development. Each language has its own definition of what units are but most modern programming languages view the class concept as the core unit of testing. Once we have a class, we can test it and all of the parts associated with it, especially its methods.

We will be introducing parts of file rational_nunit/rational_unit_tests.cs.

A key notion of testing is the ability to make a logical assertion about something that generally must hold true if the test is to pass.

Assertions are not a standard language feature in C#. Instead, there are a number of classes that provide functions for assertion handling. In the framework we are using for unit testing (NUnit), a class named Assert supports assertion testing.

In our tests, we make use of an assertion method, Assert.IsTrue() to determine whether an assertion is successful. If the variable or expression passed to this method is false, the assertion fails.

Here are some examples of assertions:

There are many available assertion methods. In our tests, we use Assert.IsTrue(), which works for everything we want to test. Other assertion methods do their magic rather similarly, because every assertion method ultimately must determine whether what is being tested is true or false.

Besides assertions, a building block of testing (in C# and beyond) comes in the form of attributes. Attributes are an additional piece of information that can be attached to classes, variables, and methods in C#. There are two attributes of interest to us:

In the remainder of this section, we’re going to take a look at the strategy for testing the Rational class. In general, your goal is to ensure that the entire class is tested. It is easier said than done. In later courses (Software Engineering) you would learn about strategies for coverage testing.

Our strategy will be as follows:

We’ll look at how to actually run our tests in a bit but let’s continue taking a look at how the rest of our testing is done.

It is pretty well established by now that the ability to compare is of fundamental importance whenever we are talking about data. Everything we do, especially when it comes to searching (finding a value) and sorting (putting values in order) depends on comparison.

In this test, we construct a few Rational instances (r1, r2, and r3) and perform at least one test for each of the essential operators (>, <, and =). Recall from our earlier discussion of the Rational class that the CompareTo method return a value < 0 when one Rational is less than another. It returns a number > 0 for greater than, and == 0 for equal to.

Testing of arithmetic is a fairly straightforward idea. For all of these tests, we create a couple of rational numbers (47/64 and -11/64) and then call the various methods to perform addition, subtraction, multiplication, division, reciprocal, and negation.

As you can observe by looking at the code, the magic occurs by checking whether the computed result matches the constructed result:

And it is in this example where we begin to see the art of testing. You can write tests that assume that other tests of features you are using have already passed. In the event that your assumption is wrong, you’d be able to know that this is the case, because all of the tests you assumed to pass would not have passed.

Again, to be clear, the arithmetic tests we have done here assume that we can rely on the constructor and the comparison operation to determine equality of two rational numbers. It is entirely possible that this is not true, so we’ll be able to determine this when examining the test output (we’d see that not only the arithmetic test fails but possibly the constructor and/or comparison tests as well).

The remaining tests are fairly straightforward. We’ll more or less present them as is with minimal explanation as they are in many ways variations on the theme.

Testing Rational Conversions (to other types)

In this test, we want to make sure that Rational objects can be converted to floating point and decimal types (the built-in types of the C# language).

For example, Rational(3/6) is 1/2, which is 0.5 (both in its floating-point and decimal representations.

The parsing test tests whether we can convert the string representation of a rational number into an actual (reduced) rational number. We test three general cases:

A test pad should appear and show something like

This likely just shows the overall results in the summary line at the bottom. You can show details by clicking on one or more of headings at the top of the pad. In particular, if you click Successful Test, Failed Tests, and Output (and likely drag the top of the pad to make it large enough to see everything), you should see something like

As you can see in the above displays, all of the tests in RationalTests get executed, and they all pass. There are no failed tests to see, but that part would be the most important details if any were there! The output just details the sequence of execution.

Xamarin Studio remembers the headings selected, so next time you run tests, the same details will show.

The testing file is using NUnit.Framework. There is a little more to this. If you edit the references, selecting All sources, and entering nunit in the search box, you see 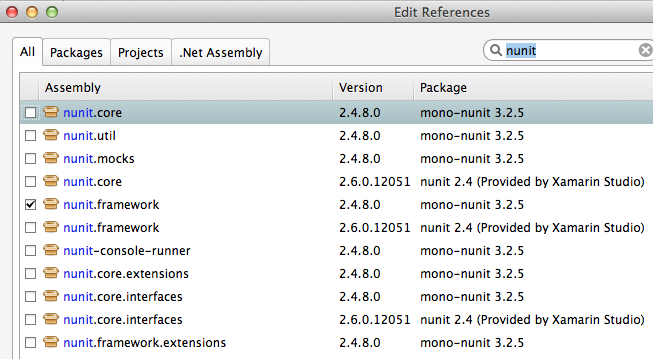 Note there are more than one version of nunit.framework. On a Mac, the selected version worked directly, but the logical looking one, provided by Xamarin, did not work directly. Either worked if we select the context menu in the Solutions pad for the nunit.framework version added to the references, and make it look like 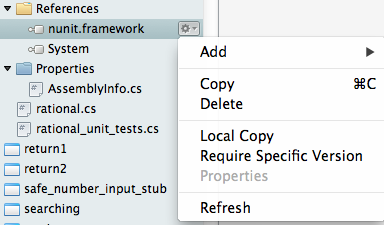 with the “Require Specific Version” item toggled so it is not checked.

We waited until now to discuss unit testing, because the test classes are coded with instance methods, unlike the static methods that we started out with.

A test can also call Main of a program, with specified parameters that would normally come from the command line. See the small project cmdline_to_file.

If you completed the program from the stub string_manip_stub/string_manip.cs, then add a testing class using NUnit that tests ReplaceFirst with the same parameters as used in the original file’s Main. If you did the elaboration of ReplaceFirst that just returns the original string when the target is not found, then add tests for that, too. Remember the necessary library reference and try it out.

Add a testing class using NUnit to Homework: Grade File. Remember the necessary library reference. Sample data files and files for testing the results are included in the project. Just test using command line parameters (so there is no Console input). Test with both comp170 and comp150.