Like other numbers, we think of a rational number as a unit, but all rational numbers can be most easily represented as a fraction, a ratio of two integers. We can create a class Rational, so

would create a new Rational number for the mathematical expression, 2/3.

Our previous simple class examples have mostly been ways of collecting related data, with limited methods beyond getters and setters. Rational numbers also have lots of obvious operations defined on them. Our Rational example we will use most of the concepts for object so far, and add a few more, to provide a rich practical class with a variety of methods.

Thinking ahead to what we would like for our rational numbers, here is some testing code. Hopefully the method names are clear and reasonable. in the illustration we operate on a single rational number, and do calculation with a pair, and parse string literals. The code is from test_rational/test_rational.cs:

One non-obvious method is CompareTo. This one method allows all the usual comparison operators to be used with the result. We will discuss it more in Rationals Revisited.

The results we would like when running this testing code:

A Rational has a numerator and a denominator. We must remember that data. Each individual Rational that we use will have its own numerator and denominator, which we store as the instance variables (and which we abbreviate since we are lazy):

We could have a very simple constructor that just copies in values for the numerator and denominator. However, there is an extra wrinkle with rational numbers: They can be represented many ways. You remember from grade school being told to “reduce to lowest terms”. This will keep our internal representations unique, and use the smallest numbers.

Intermediate operations and initial constructor parameters will not always be in lowest terms. To reduce to lowest terms we need to divide the original numerator and denominator by their Greatest Common Divisor. We include a static GCD method taken from that section, and make the adjustment to lowest terms in a helping method, Normalize, that is called by the constructor:

There are several things to note about this method:

The complete constructor, using Normalize, is below. Note that by the time we are done constructing a new Rational, it is in this normalized form: lowest terms and positive denominator:

The call to the Normalize method is another place where we have a call without dot notation, since it is acting on the same object as for the constructor.

We mentioned that instance method Normalize calls static method GCD, and this is fine. The reverse is not true:

On the other hand, there is no issue when an instance method calls a static method. (The instance variables are just inaccessible inside the static method.)

The Rational class has the usual getter methods, to access the obvious parts of its state:

We certainly want to be able to display a Rational as a string version:

Note that we simplify so you would see “3” rather than “3/1”. This is also a place where the normalization to have a positive denominator comes in: a negative Rational will always have a leading “-” as in “-5/9” rather than “5/-9”

With a Rational, several other conversions make sense: to double and decimal approximations.

So far we have returned built-in types. What if we wanted to generate the reciprocal of a Rational? That would be another Rational. It is legal to return the type of the class that you are defining! How do we make a new Rational? We have a constructor! We can easily use it. The reciprocal swaps the numerator and denominator. It is also easy to negate a Rational:

Static methods are still useful. For example, in analogy with the other numeric types we may want a static Parse method to act on a string parameter and return a new Rational.

See how our Parse method below distinguishes and handles all the cases. It constructs integer strings, parts[0] and parts[1], for both the numerator and denominator, and then parses the integers. Note that the method is static. There is no Rational being referred to when it starts, but in this case the method returns one.

That last case is the trickiest. For example "123.45" becomes 12345/100 (before being reduced to lowest terms). Note that there were originally two digits after the decimal point and then the denominator gets two zeroes to have the right power of 10:

Method Parameters of the Same Type

We can deal with the current object without using dot notation. What if we are dealing with more than one Rational, the current one and another one, like the parameter in Multiply:

We do not refer to the fields of f through the public methods GetNumerator and GetDenominator. Though f is not the same object, it is the same type:

Private members of another object of the same type are accessible from method definitions in the class.

There are a number of other arithmetic methods in the source code for Rational that return a new Rational result of the arithmetic operation. They do review your knowledge of arithmetic! They do not add further C# syntax.

The whole code for Rational is in rational_nunit/rational.cs. The testing code we started with, in test_rational/test_rational.cs uses all the methods. We will see more advance ways to test Rational in Testing.

There is also a more convenient version of Rational, using advanced concepts, in Defining Operators (Optional).

Let us start pictorially playing computer on test_rational.cs, as a review of much of the previous sections. We explicitly show a local variable this to identify the current object in an instance method or constructor.

The first line of Main,

Note the immediate value assigned to the numeric instance variables is zero: This is as discussed in Default Initializations. Of course we do not want to keep those default values: The constructor finds the value of the local variable numerator, and needs to assign the value 6 to a variable num. The compiler has looked first for a local variable num, and found none. Then it looked second for an instance variable in the object pointed to by this. It found num there. Now it copies the 6 into that location. Similarly for denominator and denom:

Then the constructor calls Normalize. Since Normalize is also an instance method, a reference to this is passed implicitly. While illustrating the memory state for more than one active method, we separate each one with a horizontal segment. 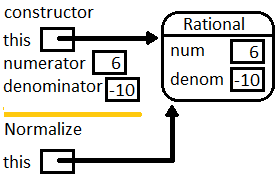 Later Normalize calls GCD. Since GCD is static, note that the local variables for GCD do not contain a reference to this. 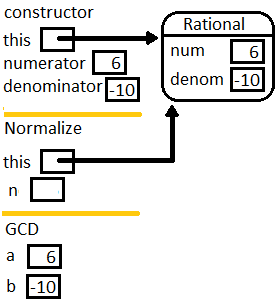 At the end of GCD the int 2 is returned and initializes n in the calling method Normalize. Then Normalize modifies the instance variable pointed to by this, and finishes. 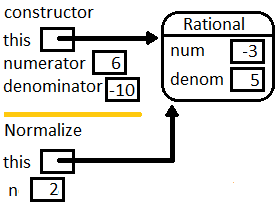 Then in Main the constructor’s this is the reference to the new object initializing f.

Consider the next line of Main:

We omit the internals of the WriteLine call, except to note that it must convert the reference f to a string. As with any object, it does this by calling the ToString method for f, so the implicit this in the call to ToString refers to the same object as f: 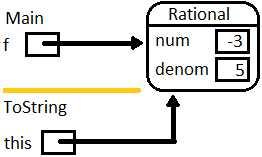 ToString returns “-3/5”, and it gets printed as part of the line generated by WriteLine….

We skip the similar details through two more WriteLine statements and the initialization of h:

The WriteLine statement after that needs to evaluate f.Add(h), generating a call to Add. The next figure shows the two local variables in Main, f and h, each pointing to a Rational object. The image shows the situation in the call to Add, just before the end of the return statement, when the new Rational is being constructed.

In the local variables for the method Add see what the implicit this refers to, and what the (local to Add) variable f refer to. As the figure shows, this use of a local variable f is independent of the f in Main: 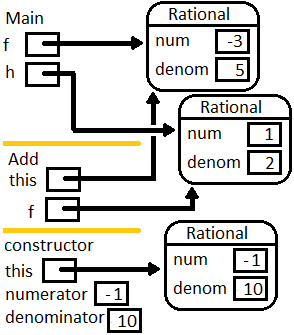 Since the return statement in Add creates a new object, the figure shows a call to the constructor from inside Add. We do not go through the details of another constructor call, but this in the constructor points to the Rational shown and returned by Add: 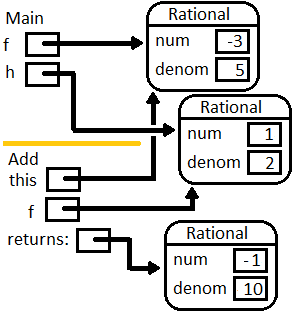 which gets sent to the WriteLine statement and gets printed in Main as in the earlier code.

Make sure you see how the pictures reinforce these important ideas:

We have played computer before in procedural programming, following individually explicitly named variables. This has allowed us to follow loops clearly after the code is written. The pictorial version with multiple object references and method calls is also useful for checking on code that is written with many object references.

When first writing code with object references that you are manipulating, a picture of the setup showing the references in your data is also helpful. New object-oriented programmers often have a hard time referring to the data they want to work with. If you have a picture of the data relationships you can point with a finger to a part that you want to use. For example in the call to Add, one piece of data you need for your arithmetic is the num field in f. Then you must be carful to note that only local variables can be referenced directly (including the implicit this). If you want to refer to data that is not a local variable, you must follow the reference path arrow that leads from a local variable to an instance field that you want to reference. 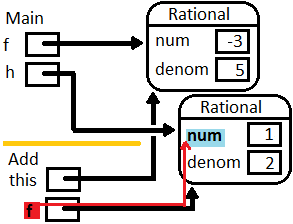 Then use the proper object-oriented notation to refer to the path. In the example, it takes one step, from local variable f to its field num, referred to as f.num. Similarly the current object’s num is connected through this, but C# shorthand allows this. to be omitted. And so on, for f.denom and denom.

Visually following such paths will be even more important later, when we construct more complex types of objects, and you need to follow a path through several references in sequence.

Suppose we have a class:

A test would be code in another class: